We had another great luncheon on April 19, 2022 where we gathered and learned about the issues facing our nation. It’s a chance to gather together, hear from local and national leaders, and solidify our resolve for being agents of returning to our conservative Christian principles. As we near vital primary and general elections this year that will likely define our generation, will you join us in supporting targeted House and Senate races to maximize our resources and flip congress? It’s more important than ever to renew our commitment to fighting for our nation’s foundational freedoms. Partner with us as we take a stand to Save America Now.

The Attack on Families & Religion Continues

Recent weeks continue to reveal new levels of assault on many of our nation’s core values by the Biden administration. A recent budget proposal has continued several attacks on the unborn, the family unit, an the religious liberty to maintain and advocate for a Judeo-Christian sexual ethic.

The FY 2023 budget continues to exclude vital Hyde Amendment language that protects government funds from supporting and extending abortion services. In addition, the administration continues to roll back religious freedom protections surrounding sexual orientation and gender identity. Add to this the President’s most recent full-throated support of the transgender agenda and we move more and more into a world where it can be both unpopular and illegal to simply hold fast to what our country was founded upon.

And yet, in the face of continued attacks on our way of life, we remain encouraged and resolute that our work is just as important as ever. Will you join us in our mission to flip Congress and pull our country back from the brink? WIll you take a stand to help Save America Now?

A Look At Where We’ve Been

These are challenging days, to be sure.

In the midst of all that is happening in our world right now, we want to pause and take a moment to thank you for your support of the Save America Now PAC this past year. Our organization is only 10 months old, but has attracted over 150 contributors and we have raised well over $75,000.

We trust you’ll be pleased to know that we have been using those funds as follows:

First round of candidate support for these 5 candidates:

With National TV coverage on ESPN and NBC Sports, we have sponsored two NASCAR cars this past year. In June we were the No. 15 car at the Xfinity race in the Poconos and in November we sponsored the No. 15 car in Phoenix. We were able to secure excellent sponsorship rates, driver endorsements, and foster support of NASCAR fans nation wide. 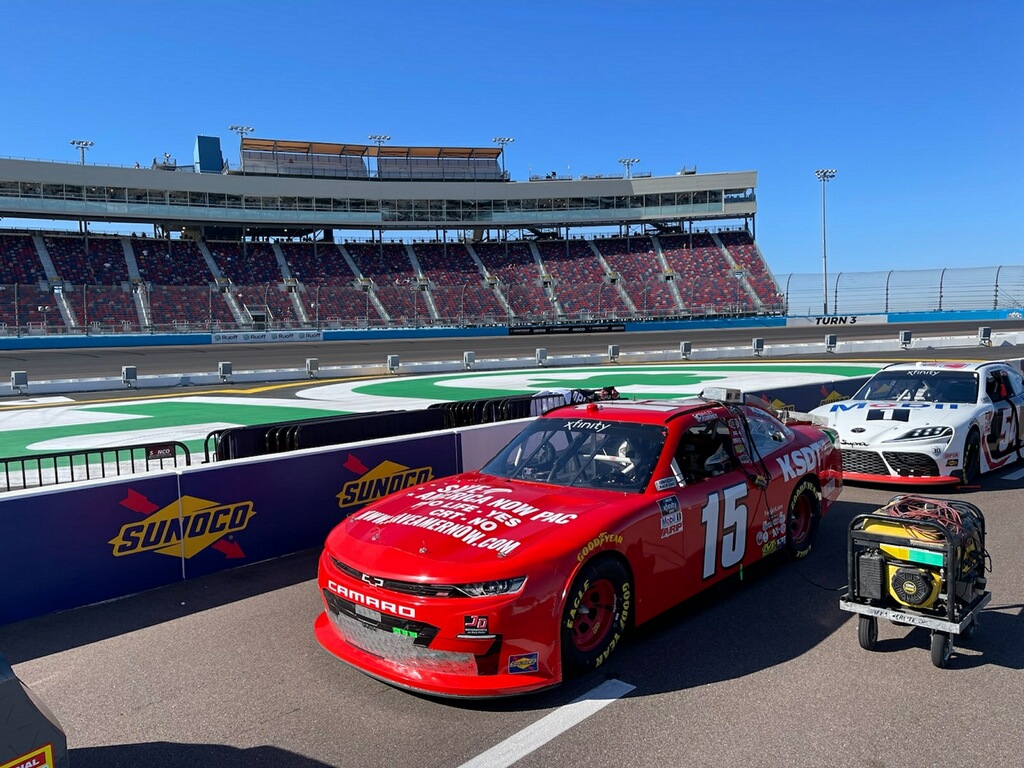 We have sponsored 2 PAC Study Group lunches held at the Lomas Santa Fe Country Club with excellent speakers and candidates running in Southern California. Even more importantly, we distributed significant conservative educational materials and hundreds of books such as Newt Gingrich’s Beyond Biden and the recent two-volume ”Epoch Times” publication How the Specter of Communism is Ruling Our World.

We had a great exhibit booth at the Texas Republican Women’s Conference in Round Rock Texas, with more than 1,000 attendees. 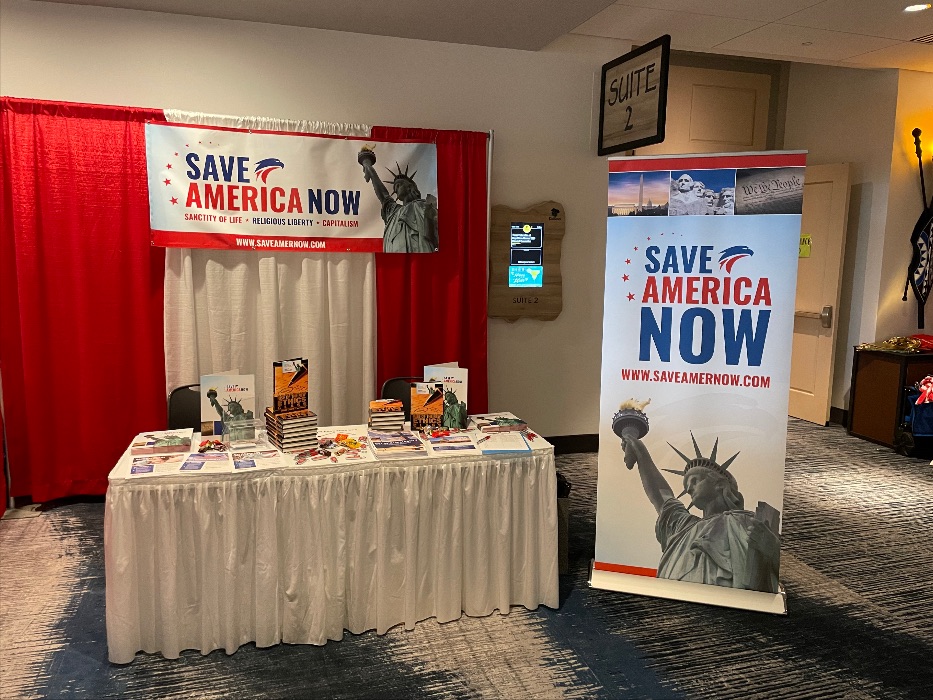 Other Areas Save America Now PAC Has Been Involved

Soon we will be doing another round of funding for 5-7 more House and Senate candidates, but I need your help. We want to raise another $25,000 by April 30th to help with key primaries.

Our children and grandchildren deserve a nation of freedom to honor God and to have liberty as we have had over our lifetimes. Let’s stand together and Save America Now.

We’re excited to announce that the Save America Now PAC has completed its initial round of candidate funding. In this round, we’ve limited our support to 5 outstanding candidates, each of which we encourage you to research and support as well. Now that our organization is up and running, we look forward to supporting many more candidates as we head into the general elections later this year.

But for now, here are the 5 candidates we’ve chosen to support:

As always, thank you for your support. We’re encouraged by our progress and, with your help, we can all do our part to take a stand and Save America Now.

Continue to Stand With Ukraine The people of Ukraine continue to fight against the evil onslaught of a wicked dictator. In addition to the brave military personnel who are defending their nation’s freedom from tyrannical takeover, let’s remember the countless children and other civilians who continue to bear the weight and consequences of Russia’s unjust hostility toward their neighbor.

In addition to your prayers, if you’d like to financially support these dear men and women you can do so via the following organizations:

Save the Children
Samaritan’s Purse

Praying with you all for a speedy and just ending to these atrocities.

We Stand With Ukraine

At this pivotal moment, as we stare authoritarian government in the face and watch its dismal evil on display, we stand with the brave, freedom-loving people of Ukraine. Our thoughts and prayers are with these brave men and women as they lay down their lives for liberty and justice. May God bless their desire for freedom and fierce resolve in the face of tyranny.

What Happens When Government Is Too Big

Most are aware of what’s happening in Canada this week. Protesting big-government vaccine mandates, Canadian truckers have quite literally taken to the streets in order to speak against violations of freedom and conscience.

It’s difficult not to see the parallels under the Biden administration, which thinks our core freedoms are nothing more than a passing fad — outdated relics of a bygone time.

With so many pivotal elections happening this year with the potential to shape our nation for years to come, it’s imperative that we band together, stand, and act as one. Will you join us in working to put the right people in our government? Will you take a stand to Save America Now?

As 2021 comes to a close, we’re thankful that it’s been both a busy and productive year. With your support we’ve already been able to accomplish much and position ourselves collectively to increase our impact in next year’s elections.

In light of this, we’d first like to say thank you for your support. It means the world and our labor is not in vain.

Second, we’d like to ask you to help. To give us the momentum we need to break into 2022 with force and change, we’re aiming to raise $10k before the end of the year. Would you consider contributing? With the midterms rapidly approaching, it’s more important than ever to be ready as we find and support those candidate who can — and will — prevail in 2022 and flip the House and Senate.

Join us as we take a stand and push forward, for our children, to Save America Now.

We are excited to announce that former Speaker of the House Newt Gingrich has joined Save America Now as the PAC’s Honorary Chairman. Speaker Gingrich is a Fox News contributor, podcast host (Newt’s World), and syndicated columnist. He is the author of 41 books, including 18 fiction and nonfiction New York Times bestsellers. His latest include Beyond Biden: Rebuilding the America We Love and Trump and the American Future: Solving the Great Problems of Our Time.

We’re thankful for Speaker Gingrich’s vote of support and our shared vision to take a stand and Save America Now.

First of all, we’d like to take a moment to say thank you. Your support as we seek to unify around what makes our country great — the sanctity of life, religious liberty, and the free market — in order to bring our country back from the brink is so important. As we reflect this thanksgiving weekend, we’re thankful for these freedoms and for men and women like you who choose to take a stand and let your voice be heard. We wish you and yours the happiest of holiday seasons.

Second, Save America Now PAC is excited to announce our first candidate funding. As we seek to support quality conservative candidates who are committed to our three key pillars and promise hope for our nation moving forward, we’re honored to be able to support Paul Broun in his race for congress in the GA-10 district. We encourage you to check him out.

Together our voices can make a difference. During this time of rest, let’s remain thankful and renew our resolve to Save America Now.